A weekend of trails!


My first half marathon is in less than 2 weeks. I decided to go on and do my 10 mile training run this weekend since I had done 9.3 the previous weekend, it wasn't a big stretch. I woke up Saturday morning to horrendous humidity and lack of desire to get out of bed. I decided to hit the trails instead…sometimes a change from pavement helps the morale. The trails at Capitol View Park are about 11.5 miles if you do them all. I set out to do at least 10 but secretly wanted to do the whole dang thing. I had plenty of time, getting started just before 7 am. The first few miles weren't that bad with the exception of Shelby not keeping up. The longest trail run I had done before Saturday was 5 miles, and I could feel that. My mapmyrun app was also off in its measurements which was playing with my head. It was about a mile off by the time it was all said and done. Anyway, at mile 6, I wanted to quit. It was humid, I was having trouble breathing, and I just didn't want to keep going, but I kept on and then decided to quit at mile 7. But I was waaaay away from the car at the point so I just started back that way. BUT, I decided that I was going to finish this…didn't matter how long it took. So I started walking….a lot. I got almost back to the car and noticed a trail I hadn't seen before. So I took it. When I got back to the car, my app said I had run 9.05 miles but I guess it was really close to 10. I know the section I left off is about 1.5 miles. I almost did it, but the park was getting busy with mountain bikes, and my feet were wet and felt like they were getting blisters, so Shelby and I loaded up and went home.

Sunday, I had been invited to go horseback riding at Shaker Village. I have not been on a true trail ride in FOREVER!!! I couldn't sleep I was so excited. I dropped the boys off with a friend and went to load my horse. The lady who invited me came and picked us up and off we went. Spice is not used to a slant load trailer and she was at the back, so when I opened the door, she started backing out. When she realized she could step off the trailer, she kept going and her bungee line that was tying her in the trailer snapped and she was loose. Spice is not easy to catch on a good day. She paraded around and 5 or 6 people tried to catch her but she just toyed with everyone until she was ready to be caught. After that, we were ready to hit the trails. We picked a 6 mile loop that went by a small waterfall. Well, we got off that trail somehow and ended up looping back by the trailers. So we stopped to eat our lunches. Then we decided to set out to find the waterfall again. We found it that time and had a blast finishing up that trail. Spice did so good. She really is amazing on the trails. We got back to the trailers, got the horses cooled off and loaded and headed back to Frankfort. I know Spice slept good last night. It truly was one of the best weekends I've had in a good long time.

Now to set my sights on this week of playing the role of single mom plus the last stages of half marathon prep.

Some pics from the trails: 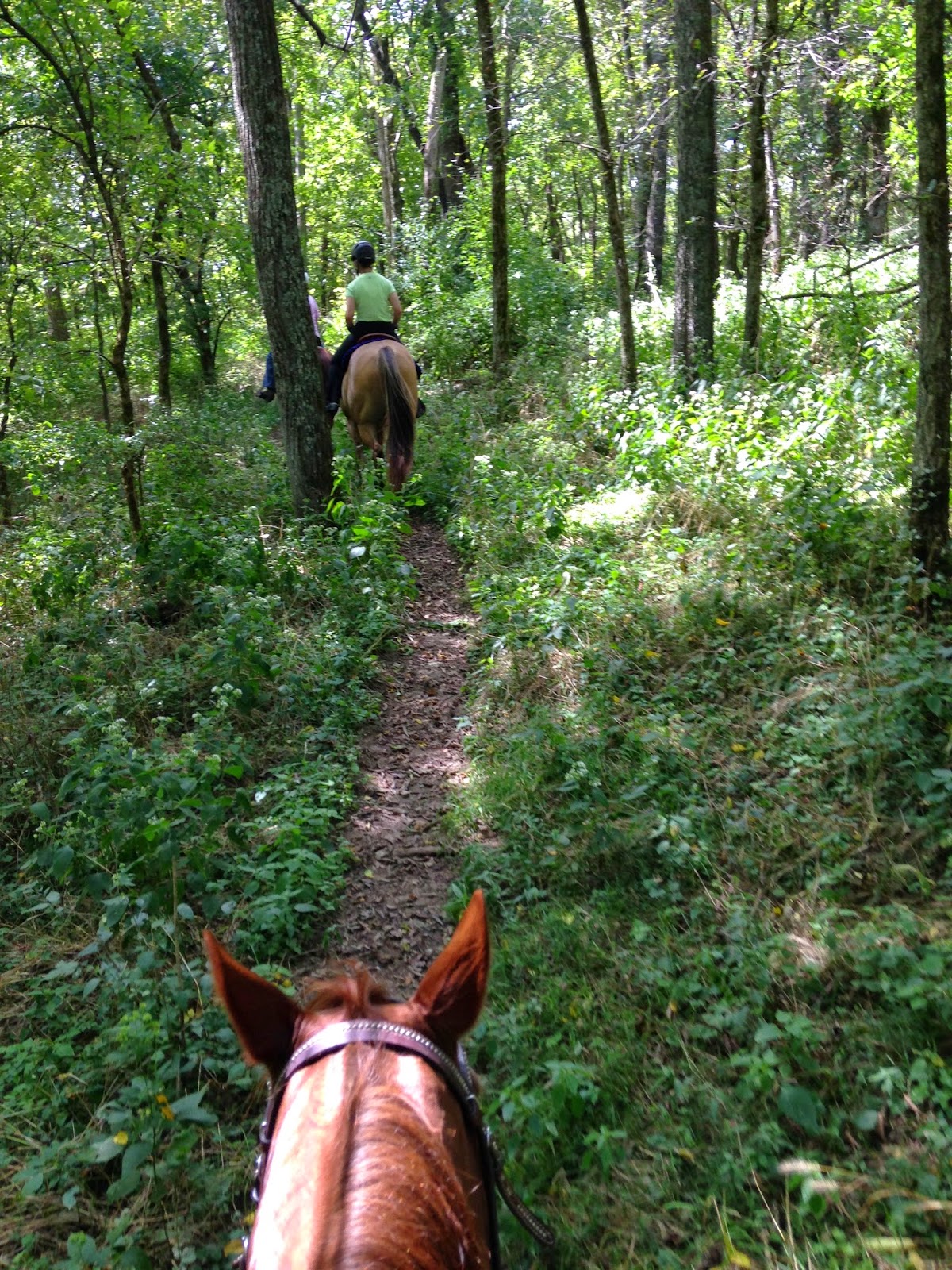 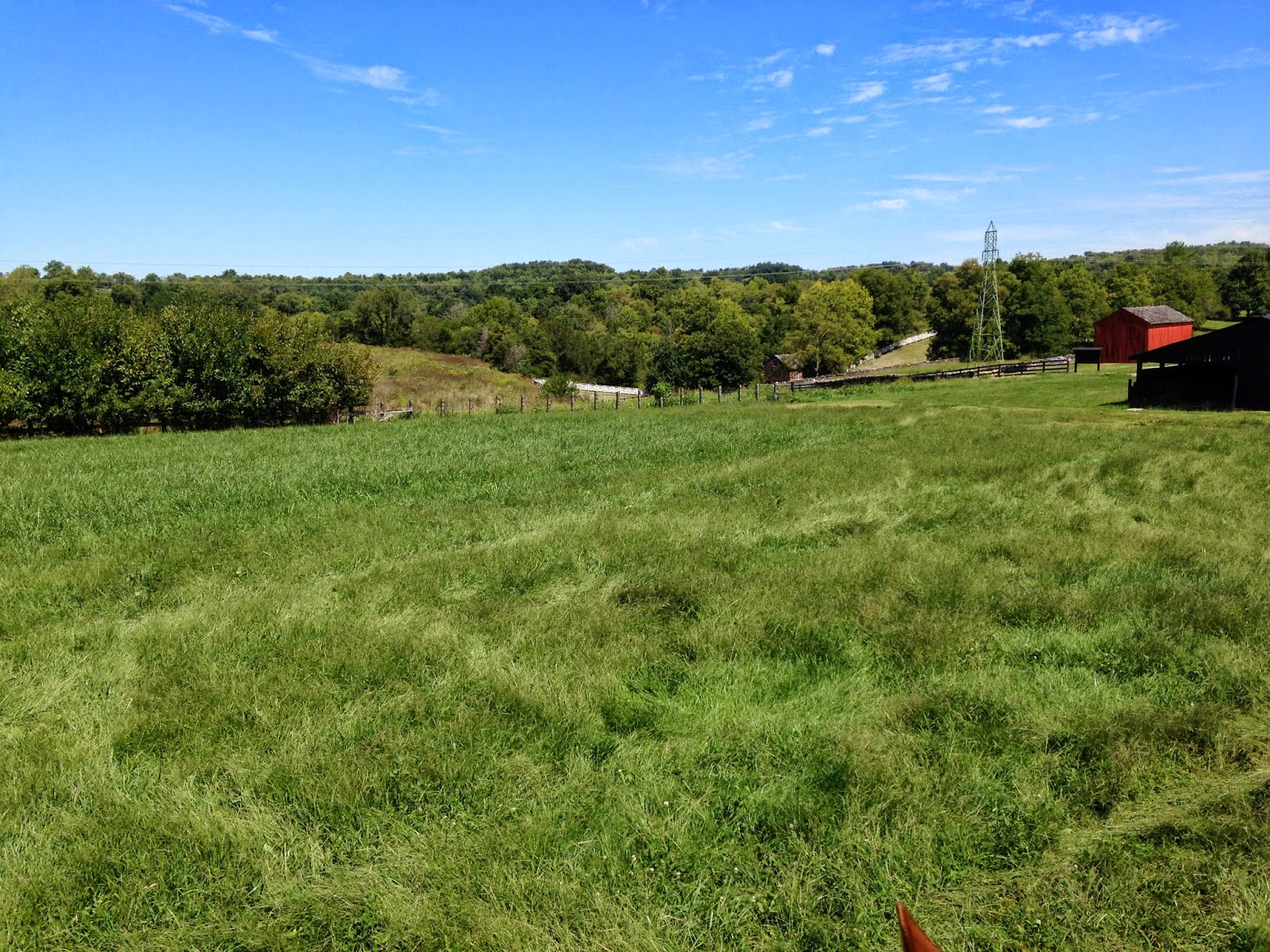 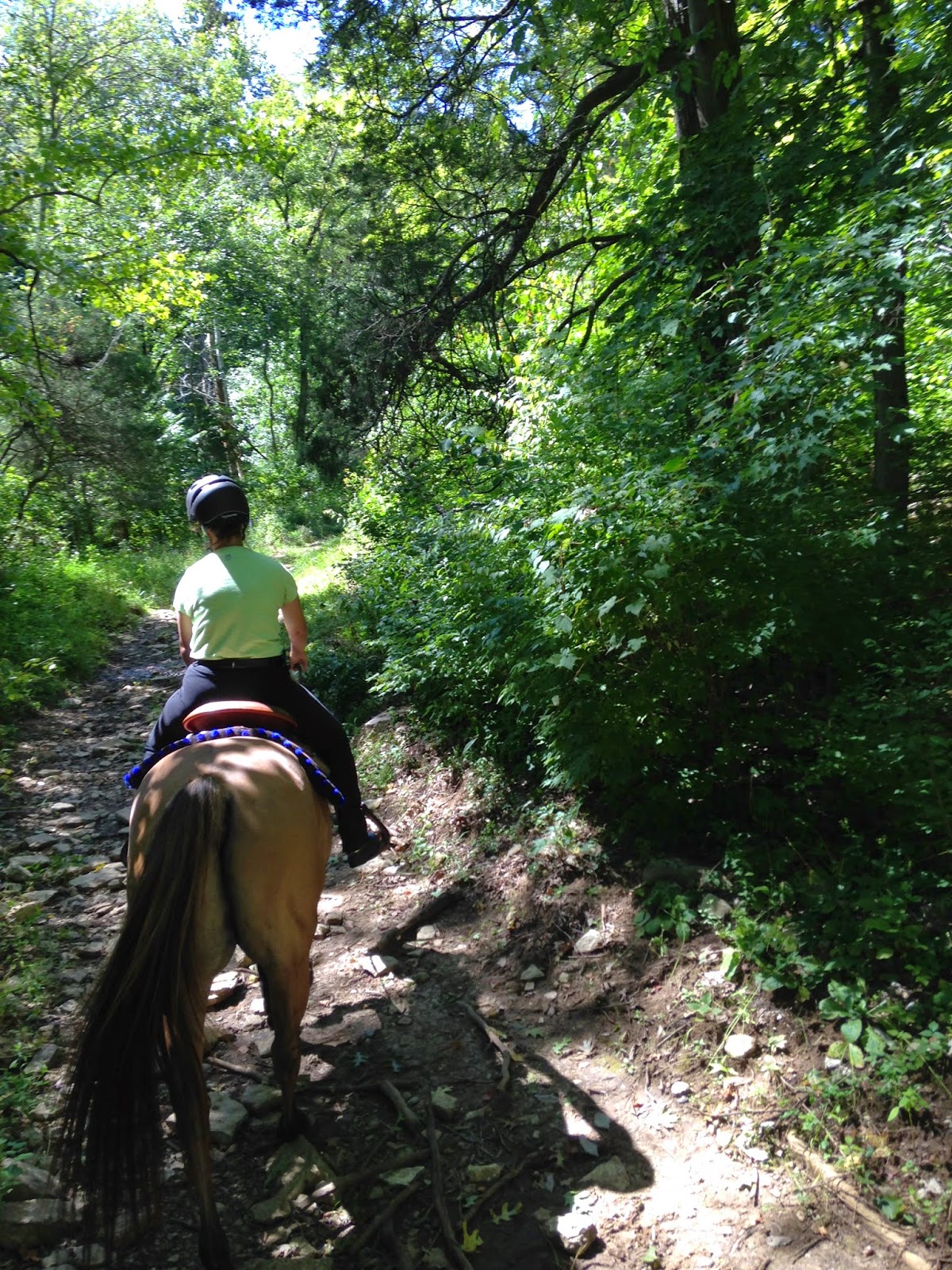 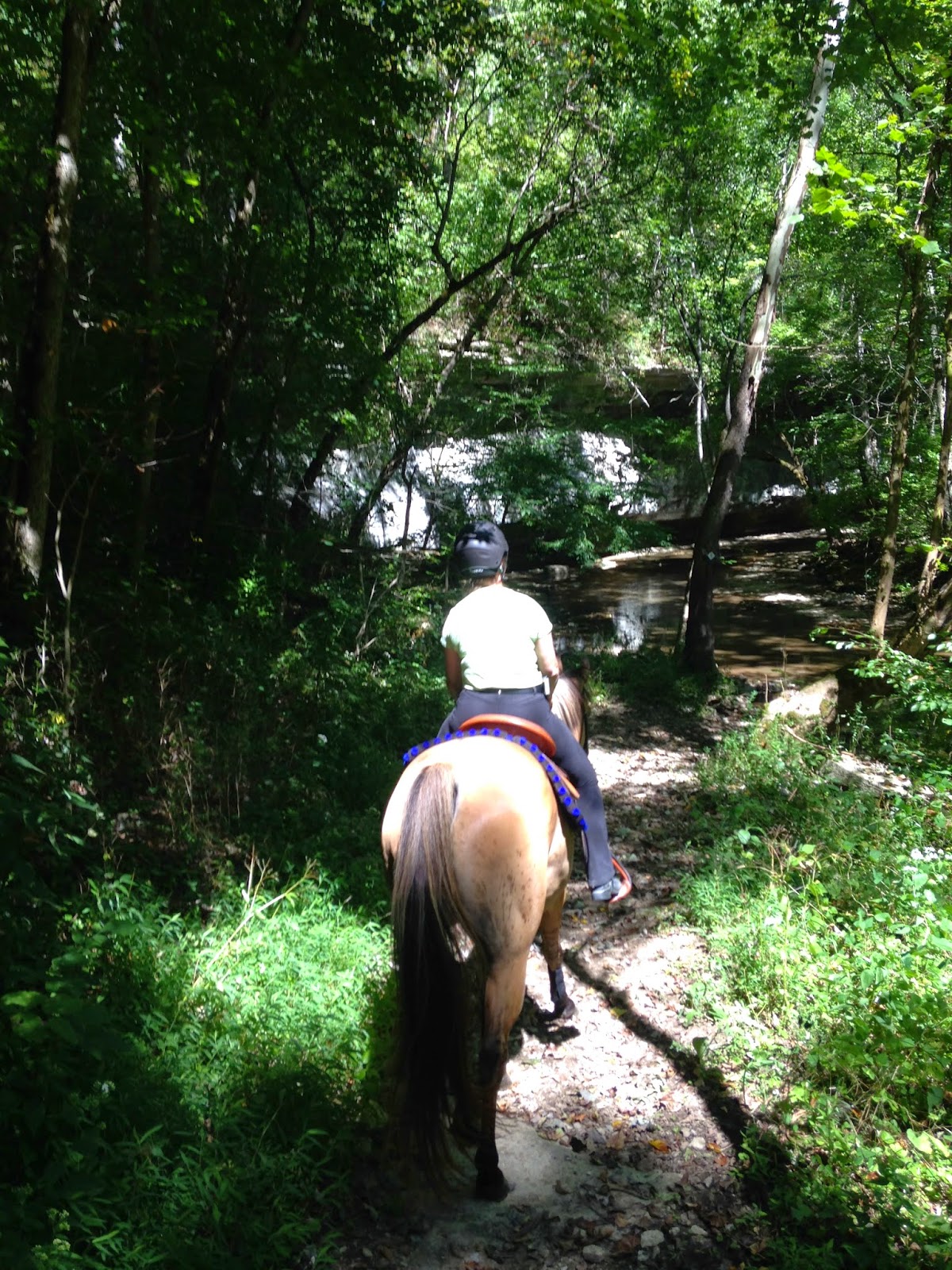 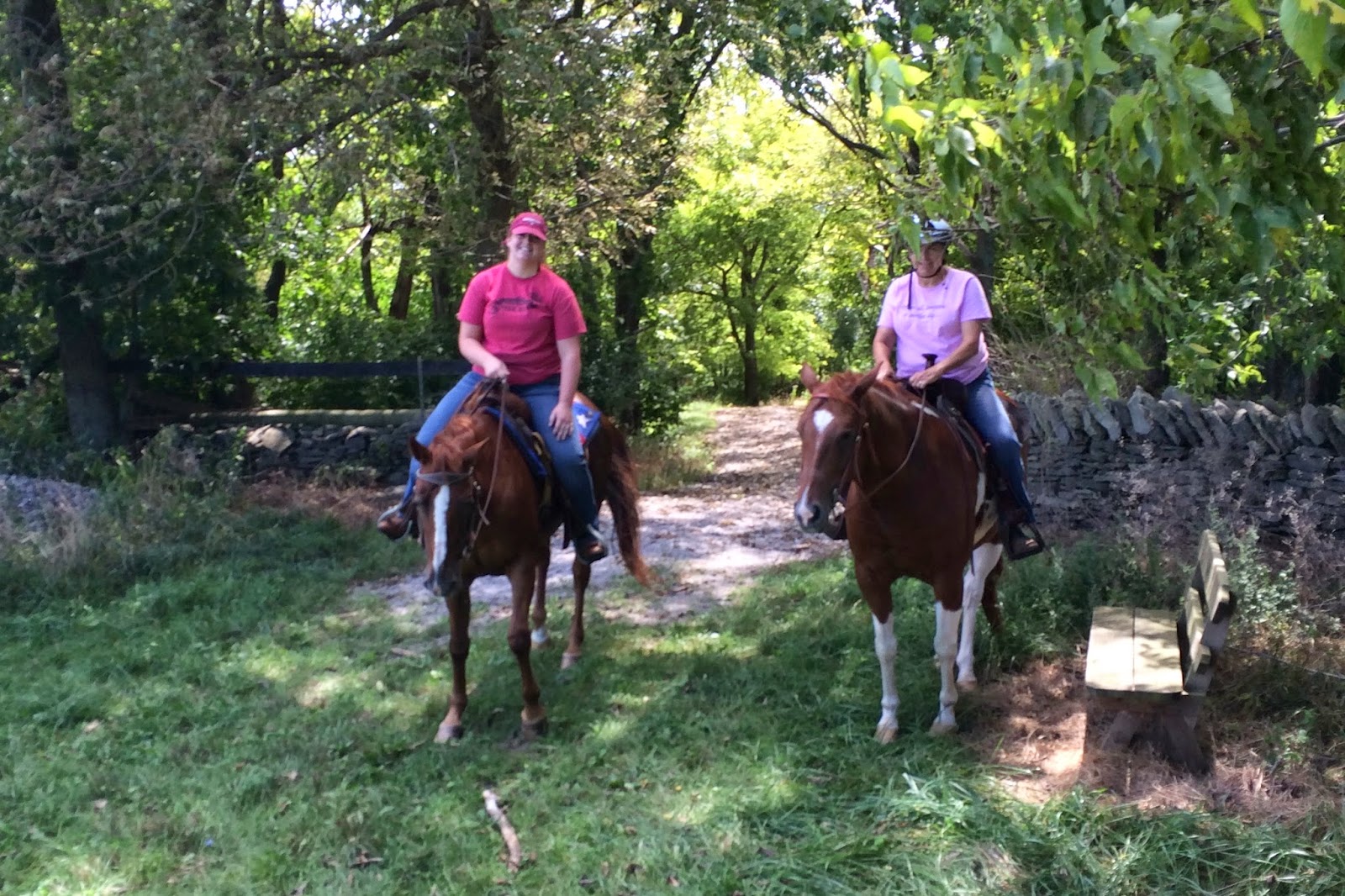 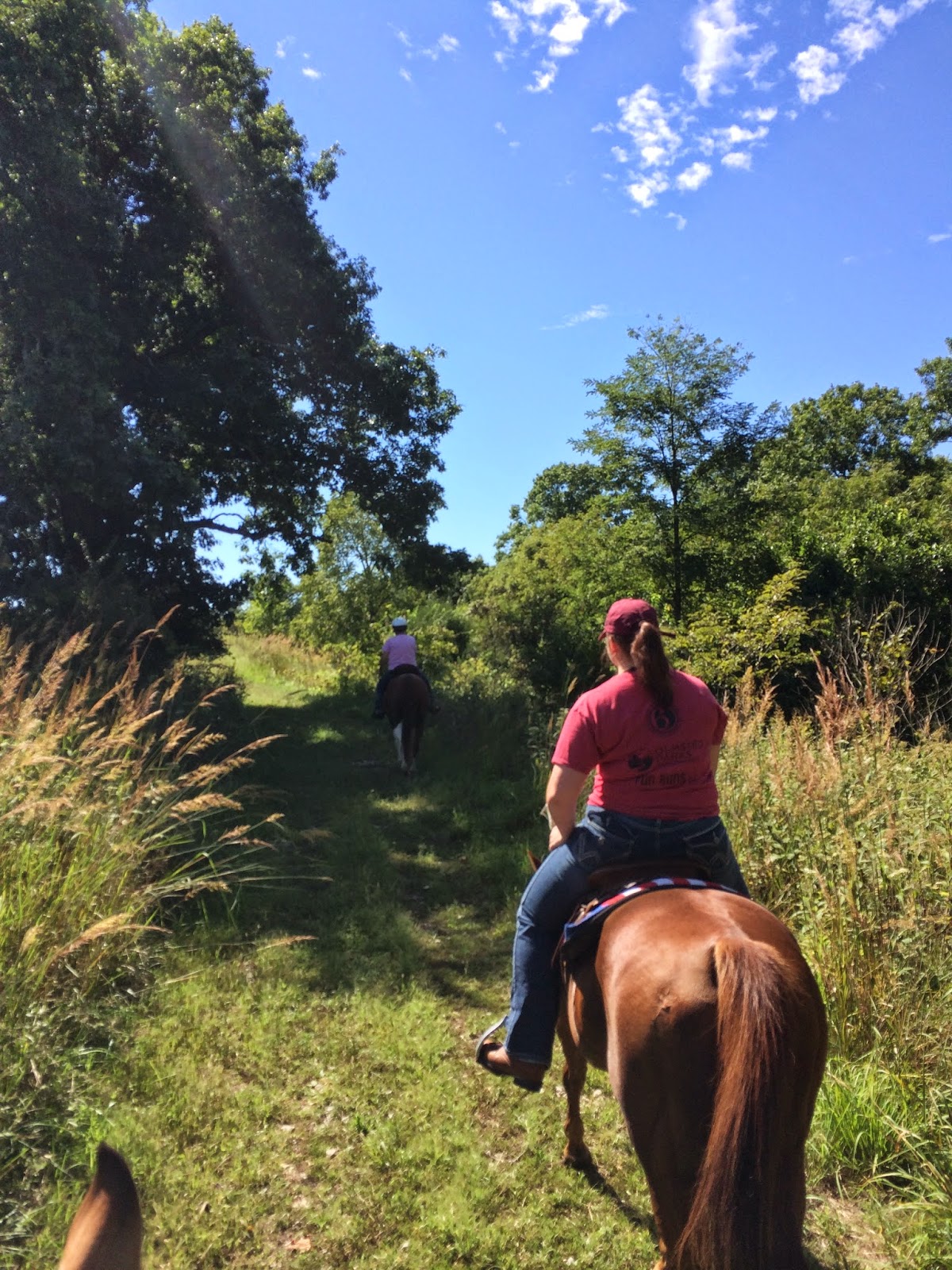 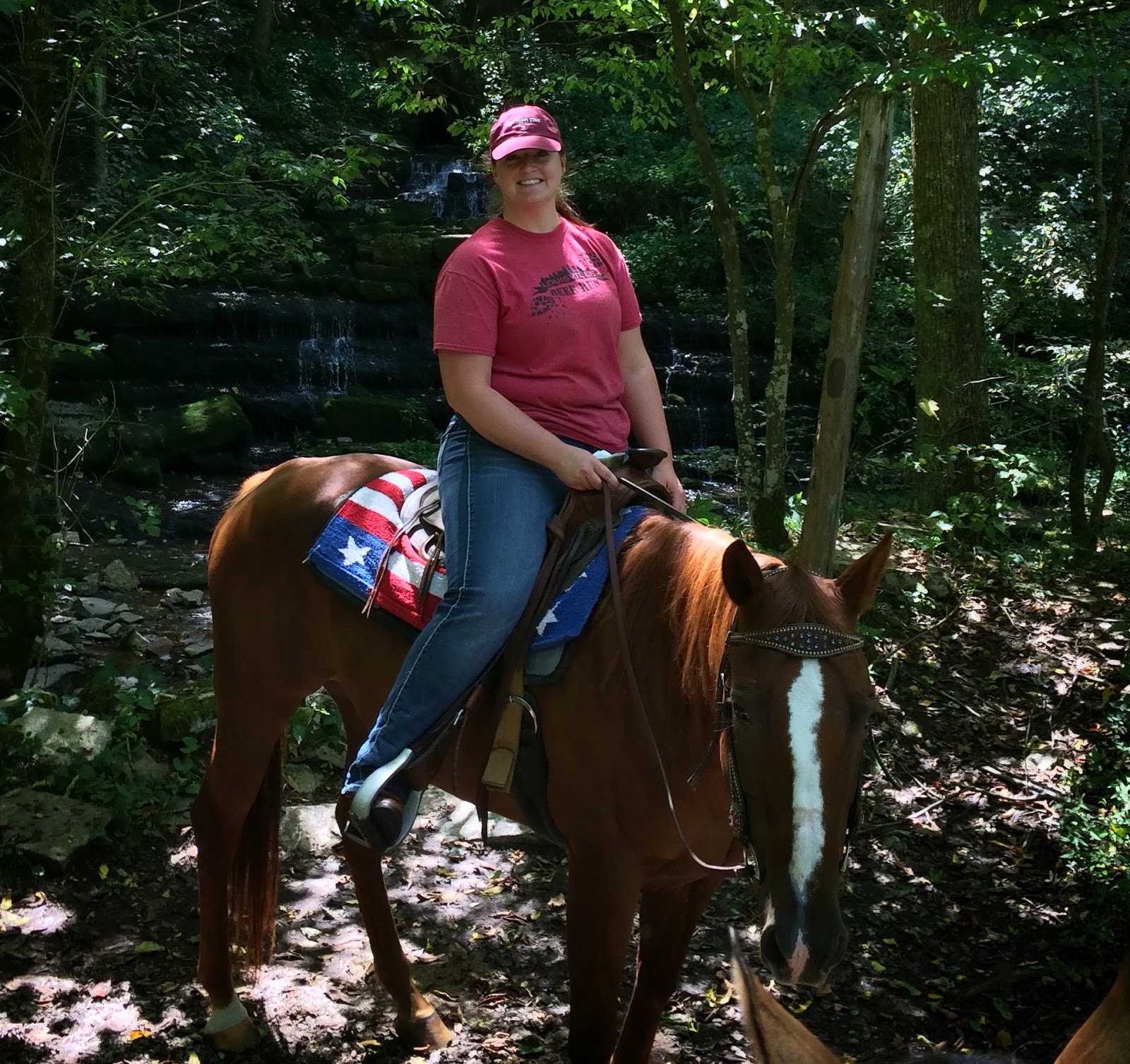 Welcome to this week's edition of my Thursday photo dump. 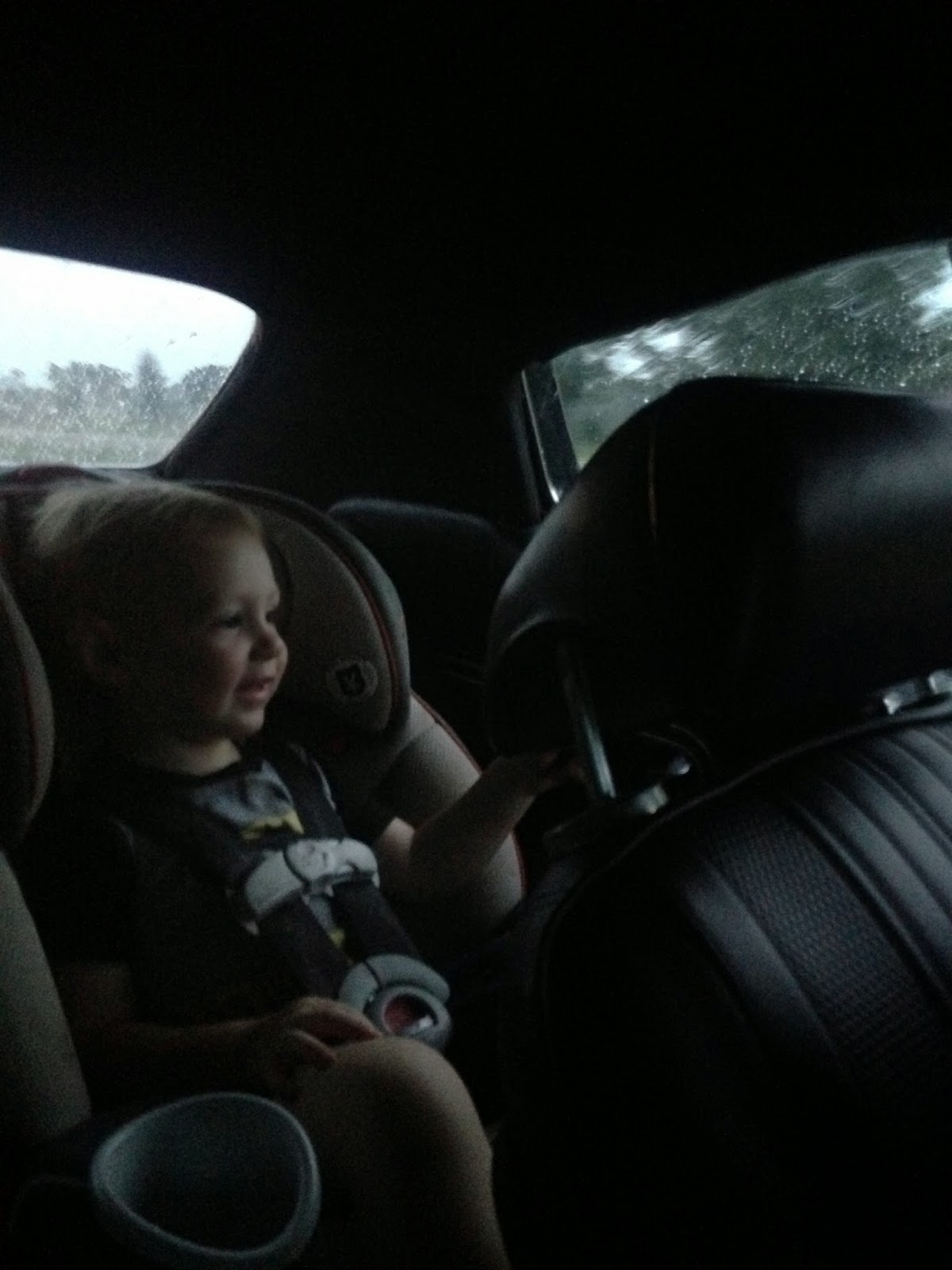 I didn't finish my first tshirt quilt yet. I'm trying to be as thrifty as possible on this quilt so I used tshirt scraps to piece together the back. It took a while, but it's done: 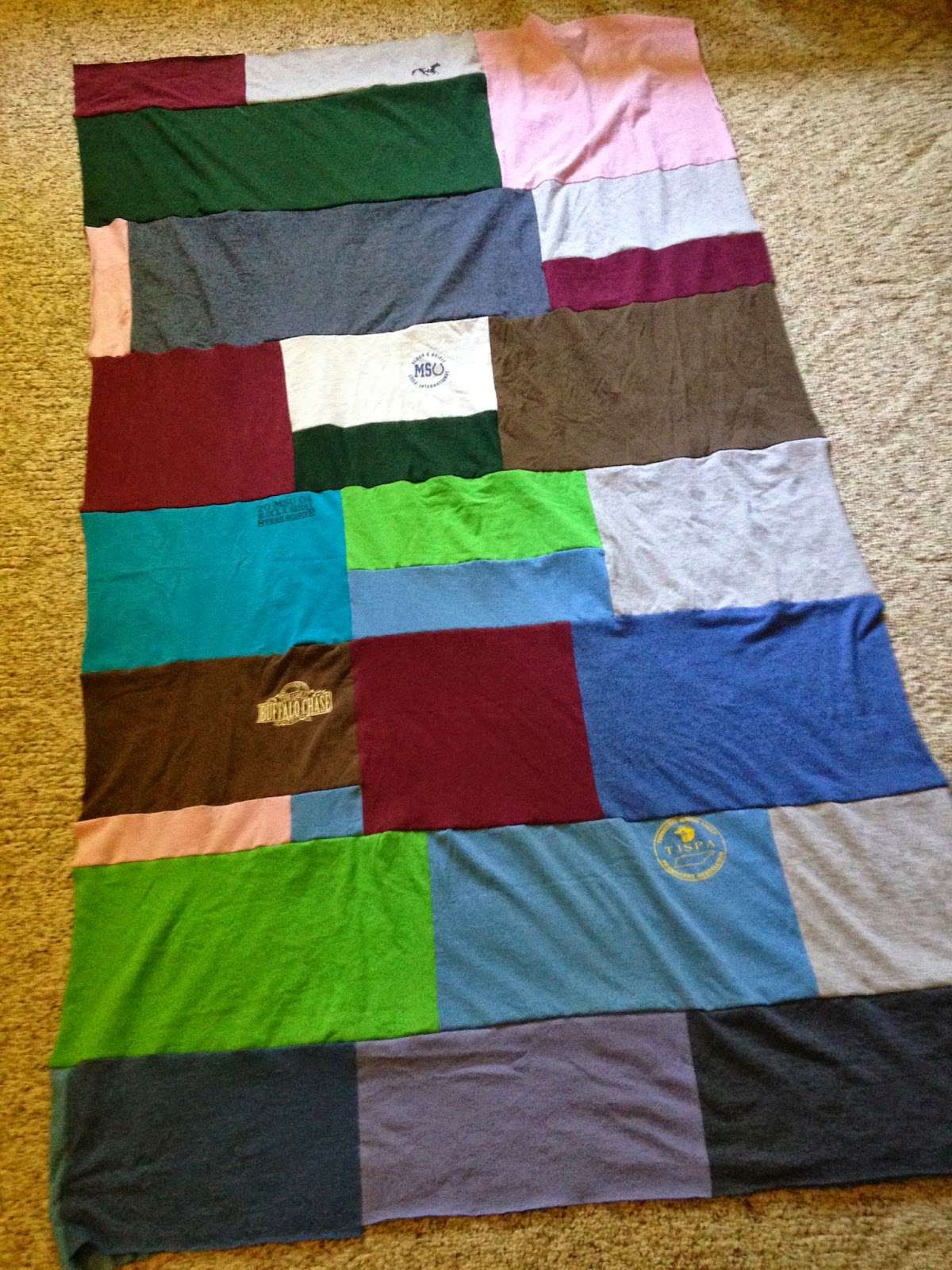 I actually think it looks prettier than the front! I guess it will be reversible. I have begun basting the batting to it and will get this sucker quilted. That's the part where I'm starting to get a bit uneasy for lack of a better word. Sewing the pieces together, while time consuming, was a cinch. I can't wait to show the finished product and get started on my running quilt!

This past Saturday, I ran the Mercer County Run for the Pets 15K for the 2nd year in a row. I truly love this race. It's one of the only local races that offers the 15K distance which is a good challenging distance, yet not as strenuous as a half marathon. 10K is still my favorite distance to race. 5K is too short and 15K still leaves me with a running hangover. But I like the challenge. I'm like a running Goldilocks.

A couple of friends were going to ride with me, so I got up early, got the car cleaned out somewhat and waited for them to arrive. One of them got confused about what street I lived on and ended up in Lawrenceburg, which is about 7 miles down the road. So, we were running late....which I hate. I had grabbed something to eat about 30 minutes before the race, but with all the rushing around, I forgot. We got to the beautiful town of Burgin about 10 minutes before race time. It's a small race, so we had no problem registering and getting to the start line in plenty of time. My friends were both doing the 5K and I was one of only maybe 50 doing the 15K. I knew there might be a good chance that I would come in dead last...it's never happened, but I relegated myself to the possibility.

The weather was beautiful and we got started just a few minutes past 8 AM. Now, if Run the Bluegrass is one of America's prettiest half marathons, I would like to nominate this race for one of the prettiest 15Ks. I love country runs. I love running past livestock farms. There was a fiesty little Angus bull about half a mile in that desperately wanted to break through his fence and make this race a running of the bull(s). I already had my escape route planned.

The course is quite hilly. It's one of the hilliest races I run. I like hills and I hate hills....it just depends on the day. I liked them ok this time. There are some really good downhills to give you some relief.

I have to say that once again, the runners were incredibly supportive. It was a modified out and back, so  there was lots of meeting up with other runners headed the other way. Tons of high five and "way to go's" were exchanged. It's the best race I've ever done in that aspect.

I had 8 miles on the training calendar for this weekend so my plan was to train for 8 miles and then do what I could for the last 1.3 miles, but not worry about it. I like to maintain less than 13 minute miles when I do my runs longer than 5 miles. I was slightly below that when I got to mile 8 (I walked a lot after 10K), so I was good. I pretty much walked the last 1.3 miles. I came out too fast clocking one of my fastest 5K times in the past year. Then the hills got to me. Over all, I was happy with my time of 2:03ish. I wasn't last, but almost...not that I would've cared. I don't care about being slow...I don't compete with anyone other than myself. I'm happy my body allowed me to go 9.3 miles without breakfast.


As some of you may know, we plan to move to Tennessee next summer before Joseph starts kindergarten. I already plan to come back yearly for Run the Bluegrass, Derby mini, Great Buffalo Chase, and the Iron Horse. I plan to add this race to my list. Seriously, if you are local and not running this one, you're missing out.  $20? A beautiful 15K course? Gels on the course (although I wish the super nice volunteer had not opened mine for me...I really wanted to wait until mile 5 to take it)? Plenty of water stops and a decent amount of post race grub? A super soft well designed shirt? A great cause? What's not to love? The only thing I would have pushed it over the top completely would have been gatorade (or the like) on the course (or at the finish). I was out of GU brew tablets and got a bad dehydration headache afterward....but that might have been that post race margarita......I'm not saying.

Did I mention that I actually get a nap time now? That doesn't mean I nap...but I could. Joseph now goes to all day preschool so once James goes to take his nap, I'm FREE!!!!! I've missed it so much. That is why I have time to blog and peace enough to compile some thoughts. I thought I would do a photo dump from my phone today with pictures from the past week.
I took James to the Kentucky Horse Park last Thursday. He loved it...except that he couldn't sit on the tractors. That made him mad. He really didn't care that much about the horses...I guess he's used to them.


On Friday I took the boys to the Louisville Zoo.
The AcoUstiKats came to do a concert at our church. They are a men's acapella (sp?) group from the University of Kentucky. They were on the tv show The Sing Off last year and did amazing. It was seriously so much fun.
Check out some of their videos here & here.